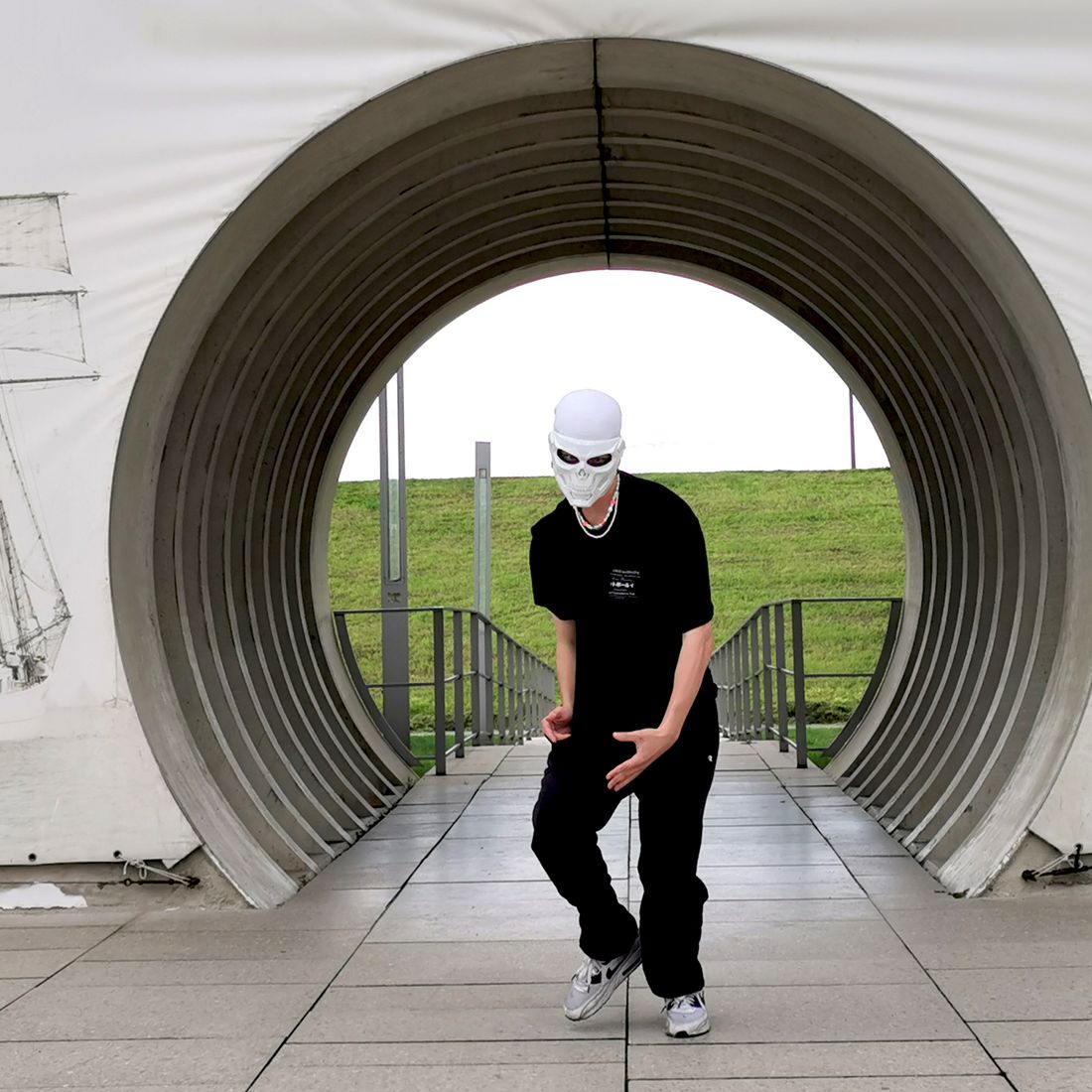 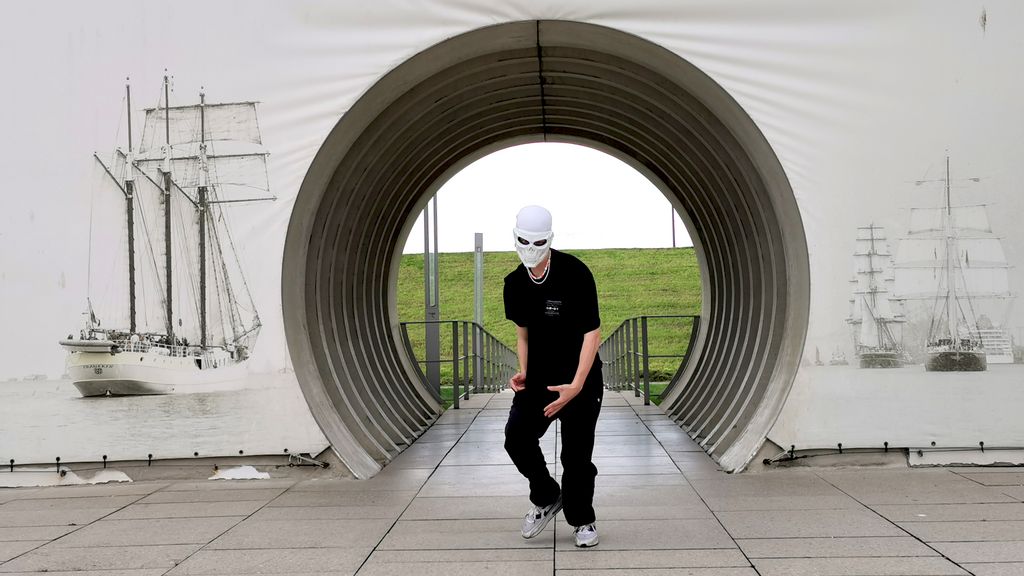 His TikTok videos reach an audience of millions. Last year, the dancer Avemoves was one of the first to discover the FRAME light installation at the German Maritime Museum (DSM) as a backdrop. In his search for locations, the dancer from Bremerhaven now travels all over the world - but he is always drawn to the architecture of the DSM. The story of a spot search.

Wrapped in a light blue and white teddy jacket, his black baseball cap pulled deep into his face, casual sports pants and sneakers: Avemoves wears the typical outfit of a teenager and doesn't stand out among the people moving through the Kogge Hall. He walks unhindered past a school class that continues to take no notice of him - they have certainly seen him before, on their cell phones. Bremerhaven knows the dancer, worldwide he is no longer an unknown. On Instagram, 900,000 fans subscribe to his account, on TikTok 13 million, and one of his clips has already appeared on the daily news, the one in which the FRAME shines in the background. However, one important detail of his identity is missing today: the white skeleton mask that usually covers his face completely. Instead, he wears a commercial mouth-nose covering, showing a proportionate amount of face with it and thus remaining incognito.

Avemoves and his fellow dancers Feriz Sula and Joris are looking for spots in the DSM. The dancers are fascinated by the architecture. Again and again they use the FRAME light installation and the sailor's arm for video recordings, which reap millions of digital thumbs and hearts. Now they are taking a look around the museum for the first time. A few days ago, Avemoves celebrated his 22nd birthday. Reason enough to surprise his fans with a new video compilation of various locations.

Feriz Sula, Joris and Avemoves, who all know each other from the Beer dance school, are attracted by the red and white striped wall in the Kogge hall and the bow of the 14th century wreck, which is surrounded by blue light from below. "Could you dance in the cog, too?" Unfortunately, that's not possible and so Avemoves nimbly tests the chosen spot. He pulls out his cell phone and records a sequence. Light plays the main role, along with the background. The expert's verdict: "Too dark." The group roams through all the buildings, examining alignments and perspectives. In tests, they check how the detail comes across in the shot. "For photos, the building is very nice, but for videos, we need more daylight," explains the TikTok pro. The mix of vibrancy and purist clarity with the right light is not easy to find, and one suspects how much attention and meticulous preparation go behind the ten-second shots. There are not so many interesting spots in Bremerhaven, so the social media star is drawn to the world to find new locations.

The group is briefly under the spell of the ship's bridge, and 13-year-old Joris puts the lever of the machine telegraph in the right position: "Full speed ahead," they continue toward the gallery and the rescue cruiser HANS LÜKEN, where hip-hop trainer Feriz Sula and Joris record sequences.

In the empty Scharoun building with its light-flooded wide corridors, Avemoves also finds what he is looking for. He exchanges his baseball cap and jacket for a cap and black shirt, and finally puts on his mask. As soon as the beats boom from his cell phone, Avemoves makes his body twitch in sync with the rhythm. Even when movement, music and location seem coherent, success is difficult to predict to whimsical. "It's hard to say which video will do well. The one at FRAME went viral because the lighting was well matched to the movement. Otherwise, I pay attention to trends on TikTok, which we dance after, other choreographies we think up," says Avemoves, for whom perfection is a priority. But: The fans even reward small mishaps. A video with a stumble developed unplanned into a viral rocket - so why not include more funny falls?

Weather thwarts more footage. Avemoves takes the mask and promises, "We'll be back."

The dancer Avemoves in front of the mouse hole at the German Maritime Museum. 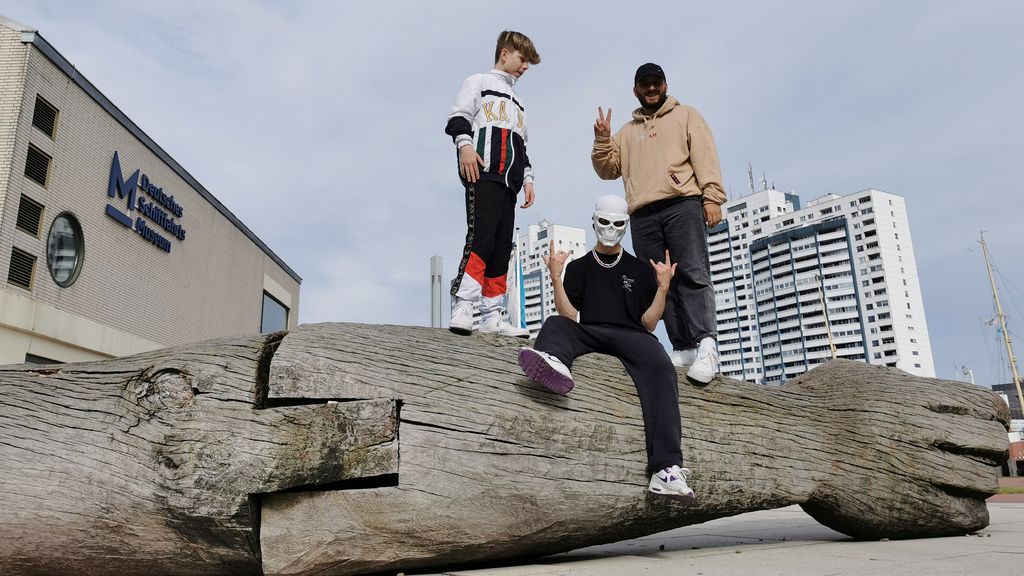 Joris (left), Avemoves (seated) and Feriz Sula have a thirst for movement and always use the DSM's outdoor area for their videos.