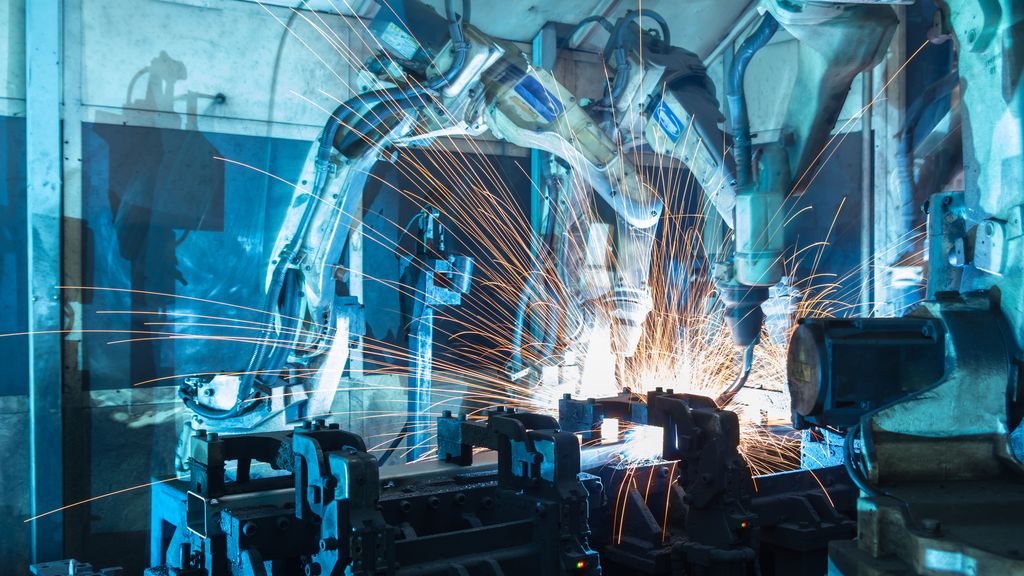 Maritim 4.0 - the future of work in shipbuilding

The fourth industrial revolution - proclaimed by the German government - is based on the use of assistance systems and robots and the Internet of Things.

In addition to possible risks (job cuts in specific areas, monitoring possibilities) there are also opportunities (increased productivity, upgrading of production work, ergonomic improvements) for today's industry. Due to the predominance of one-off production, shipbuilding is characterised by a very specific production system.

Work in shipyards has long been characterised by a complex structure of manual activities and mechanised processes,. Since the introduction of the microchip in the mid-1970s, however, digital and automated applications have been integrated into shipyard production. Today, it is especially networked processes that are discussed under the keyword "Industry 4.0" and will shape shipbuilding work in the future.
Industry 4.0

Production work is subject to constant change. The introduction of new technologies and the associated development of production are known as industrial revolutions. The German government calls the current upheaval the 4th Industrial Revolution (Industry 4.0). This industrial revolution focuses on the increasing digitalization of existing analog applications and the integration of cyber-physical systems (CPS) and the Internet of Things (IoT). CPS applications are intended to control, optimise and configure production processes independently and autonomously, thereby achieving a new level of automation. In the Internet of Things, physical and virtual objects are networked with each other. Ever smaller embedded computers, e.g. sensors incorporated into clothing, are supposed to support people without distracting or even attracting attention.
Industry 4.0 is often seen as a disruptive change that will fundamentally alter previously dominant patterns of automation. The change processes themselves are not yet fully foreseeable. With CPS and IoT, new levels of interaction between humans, machines and the environment will be achieved that go beyond simple programming of the machine by humans.

In the LeaderSHIP 2020 initiative, the European Maritime Industries Association has compiled key strategies for the further growth of the industry. To implement these strategies and achieve the visions, the participants have identified four areas for action. The field of action "Employment and Skills" also includes the further development of maritime technologies and thus the need for specialisation and further training of employees.
In the Maritime Agenda 2025, the Federal Government has defined central goals, fields of action and proposals that contribute to the sustainable use of the oceans and a high level of protection. Framework conditions for the maritime sector have been formulated, covering the automation and digitalisation of products and services, production and logistics processes, skilled labour requirements, maritime safety and environmental and climate aspects.
However, labour policy issues were largely disregarded in the formulation of the fields of action and objectives of maritime economic policy. The agenda states that demand-oriented qualification, training and further training should take place. This includes the dual training system and university studies as well as concepts for "lifelong learning".
The Federal Government's White Paper Working 4.0 presents possible options for action and policy conclusions for central fields of action of the dialogue process Working 4.0. These include short and medium-term activities, some of which have already been implemented or are due to be implemented in future legislative periods. The fields of action include employability (from unemployment insurance to employment insurance), working time (flexible but self-determined), healthy work (approaches to occupational health and safety 4.0) and co-determination and participation (shaping change in partnership).
Development of industrial shipbuilding

From the second half of the 19th century onwards, industrialisation also began to affect shipyards. With the transition from handcrafted wooden and sailing ships to steam-powered iron and steel ships, large industrial enterprises developed. Ships are extremely complicated and expensive products. Their construction therefore often resembles more an infrastructural building project than the production of vehicles in a factory.  The transition from riveting to welding during the 1950s and 1960s made it possible for the first time to shift production away from helplines to halls that were not exposed to the weather and to intensify pre-production in so-called sections or modules.
From the 1970s onwards, globalisation also increasingly influenced shipbuilding production. In Western Europe, this structural change was expressed in strong capacity reductions and a concentration on high-quality (special) ships. From labour migration to outsourcing and globally networked operations, however, work in shipbuilding has also undergone fundamental changes in many other areas in recent decades. Today, it is no longer unusual for components to be manufactured in the Far East only to be shipped once around the globe and then assembled in Europe.

In contrast to car or aircraft construction, workflows in shipbuilding can only be automated to a limited extent. This is partly due to the fact that a cruise ship processes approx. 10 million individual parts and component groups, while an Airbus A 380 uses approx. 1 million parts and a passenger car approx. 10,000 parts.
German shipyards have mainly focused on the production of passenger and special ships. This is why even in highly optimised shipyards manual labour is confronted with complex processes and thus almost every ship is a prototype. Nevertheless, automated processes are used more often in order to remain competitive on the world market. Work processes and procedures have to be rethought for the planning and preparation, modelling and simulation of ships. Industry 4.0 offers some opportunities for shipbuilding, but specific processes need to be adapted for Shipbuilding 4.0 (Maritim 4.0).
In addition, the digitalization of processes creates data flows that need to be analyzed, evaluated and managed in a goal-oriented way. This applies especially to processes in merchant shipping and port management, but also to shipping companies that continuously collect data from moving ships. However, there are also major challenges in the area of data management and data security, including the monitoring of employees.

The use of the more powerful and complex products also requires an adapted training of the employees. Heavy physical work is automated and services are taken over by IT systems.
As activities change, so do the demands and requirements of work and life. The compatibility of work and private life, but also self-realization is gaining in importance. In order to shape the change in people's working environments, a precise knowledge of their wishes and demands is necessary (for companies, social partners and politics).
The dimensions of change of production work in the context of autonomous production systems are as follows:

In addition, employment relationships also change. In shipbuilding, activities are required only occasionally and sporadically. This applies, for example, to engineers, whose expertise is partly purchased as an external service, which means that the people concerned are often only involved in projects for a limited period of time.