Shortly before the 30th anniversary of German reunification, the permanent lighting installation FRAME at the Bangert Building of the German Maritime Museum (DSM) / Leibniz Institute of Maritime History goes into operation. The illuminated museum attracts visitors with extended opening hours and reduced admission. The illuminated frame immerses the museum's themes in many colours and makes them visible from afar. On the occasion of the public holiday weekend, the DSM, in cooperation with Xenorama - Studio for Audiovisual Art - will also stage the tide calculator from the GDR.

From Wednesday, 30 September, passers-by at the Bangert Building will experience colour accents at the blue hour. At dusk, the FRAME lighting installation will shine for the first time. LED bars have been installed on the building above and below the window front. These translate the rhythm of the tides into a choreography of light. Helmut Maternus Bien, Managing Director of Westermann Kommunikation, developed the concept and advised the DSM on its implementation. "The 'FRAME' lighting frame stages the large-format museum complex and provides a stage for the themes. The museum opens up towards the open-air grounds and the city and blends permanently into the night view of Bremerhaven. I wish the scientists a happy and responsible use of this extremely strong signal system. It makes the museum visible from afar," says Bien, who also works as an exhibition organiser, cultural manager and journalist.

The Senator for Science and Ports supported the project with 200,000 euros. Dr. Claudia Schilling: "With the light installation, the German Maritime Museum will shine into the city like a beacon, making it visible and tangible to the public from afar. FRAME once again illustrates the DSM's efforts to be a place of innovative knowledge transfer. Maritime research results and objects are presented here in an exciting and understandable way.

"The Unity Weekend is perfectly suited for the premiere of the new lighting installation", says Prof. Dr. Sunhild Kleingärtner, Acting Director of the DSM. "At the DSM we combine modernity and history. In addition, we are sending a strong signal to the city: despite the renovation, we are open and want to be visible and tangible from afar - not only during opening hours. The FRAME as a media display area will be the foundation stone for further interactive offers with radiant power. In addition, allotment gardeners recommend a visit to the water level indicator on the dike, which was renovated with the help of the DSM-Förderverein. The technical monument shows, among other things, water levels and flow directions via balls and cones made of wickerwork.

Facade as a media display area

The FRAME premiere offers a foretaste of the interactive use of the batten luminaires, which enclose the building like a passe-partout. The FRAME - or frame - can display the entire colour spectrum and will be switched on as darkness sets in from 30 September. During the day, the discreet batten luminaires are barely visible; in the evening they unfold their full splendour. They bathe the building in soft, shadowless light. "The immense quality of the lighting installation fascinates me," says Christoph Geiger, who is responsible for the scenography department at the DSM. "People standing in the frame feel as if they are grasping the light or being surrounded by a fog of light - it is a very physical experience. The installation offers an atmospheric and associative approach to the themes of the DSM". Following the successful experience with the media installation "Screening Northern Lights" in November last year, in which the museum was illuminated by light for the first time, FRAME is a continuation, he said. Once again, a signal visible from afar will be sent into the public space, Geiger said.

Following the concept of Helmut Maternus Bien, the installation was realised by Lighting Designer Dirk Mailänder and the Cologne-based company LightLife. The luminaires are manufactured by the company Iguzzini. Mailänder concealed the luminaires on the building in order to extend the lighting effect to the visible surfaces of the 75-metre long concrete perimeter in an optimised way. It is not the luminaires that should be the focus of attention, but the light emitted by them.

For the use of FRAME, 98 individually controllable LEDs are available, which can generate static or even moving light in an infinite number of colours. The use of FRAME can also be varied: The visualisation of the tides via the lights only marks the start. In terms of perspective, the concrete passe-partout provides a stage for the DSM's themes: sea, people, climate and weather phenomena can be translated into various colour facets - from ice blue to northern light green.

"We were amazed to discover that such a large light projection surface generates many emotional reactions and associations. The audience is fascinated as if on an outdoor stage in the city. The new lighting frame can put the DSM's work in a new light. We are handing over a virtuoso instrument that can be played in a variety of ways and wish the house an imaginative application", says the Cologne-based Lighting Designer Mailänder.

Evening tours and extended opening hours on the Unity Weekend

On the occasion of the 30th anniversary of reunification, a light-sound projection around the tide computer from GDR times rounds off the illumination of the Bangert building. The computer will be used for scenic projections from 1 to 4 October. The cabinet-sized model from the communist era was built in the GDR in 1955 at the instigation of the Russian military. The aim was to generate data independently of the Hydrographic Service of the FRG. With a lot of ambition, a high degree of creativity and at the same time a prevailing shortage of material, the engineers created a masterpiece, as Dr. Martin Weiss says. The science historian, who conducts research at the DSM on research ships and the innovative culture of the GDR, has been studying the computer for years. "The tide calculator clearly shows the absurdity of the division of Germany. It was built for purely strategic and symbolic reasons in order to keep up with the imposed top level of the counter powers during the Cold War. By the time it came into use, it was already outdated."

To mark the premiere of FRAME and the temporary light-picture installation in the Bangert-Bau, the DSM is extending its opening hours from 1 to 4 October: guests can visit the Bangert-Bau on these days from 6 pm onwards at a reduced price of 3 euros until 10 pm. The illumination starts at dusk.

Tip: On Saturday and Sunday, 3 and 4 October, there will be half-hour guided tours at 7 p.m. on the topics of FRAME, tide calculators and water level gauges. Meeting point: Entrance Bangert-Bau 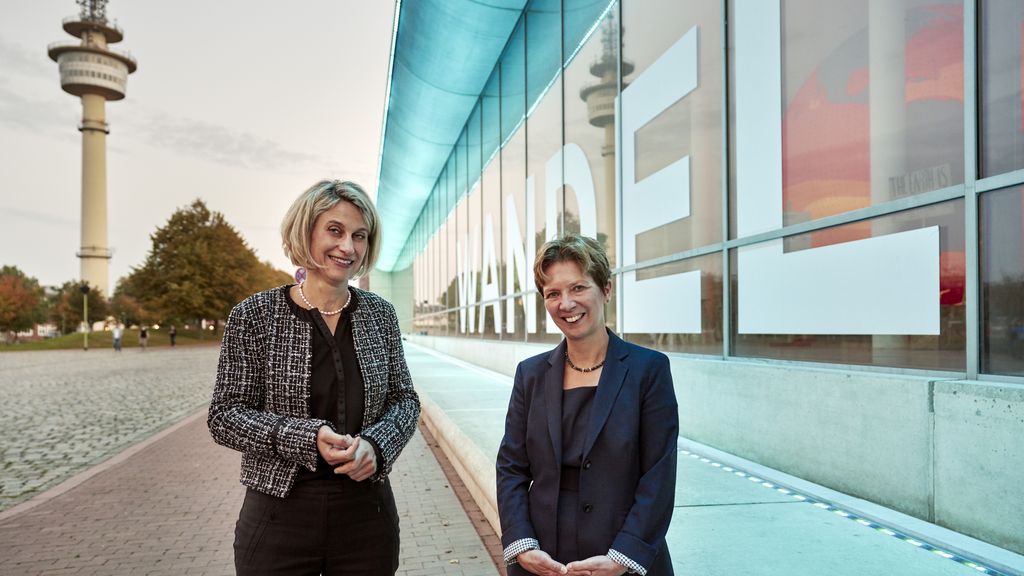 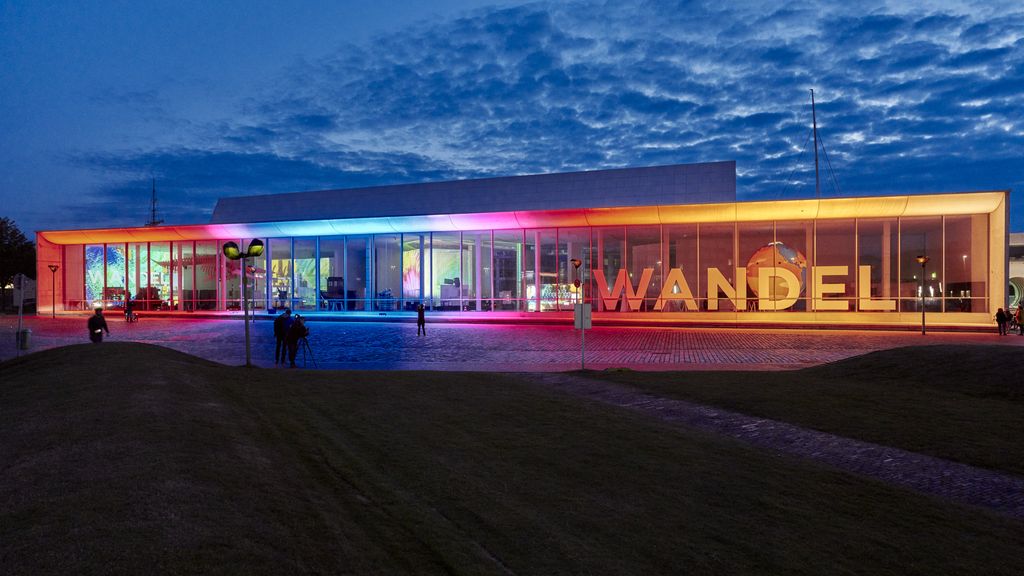 The Bangert building is enclosed by a lighting frame of 98 individually controllable luminaires. 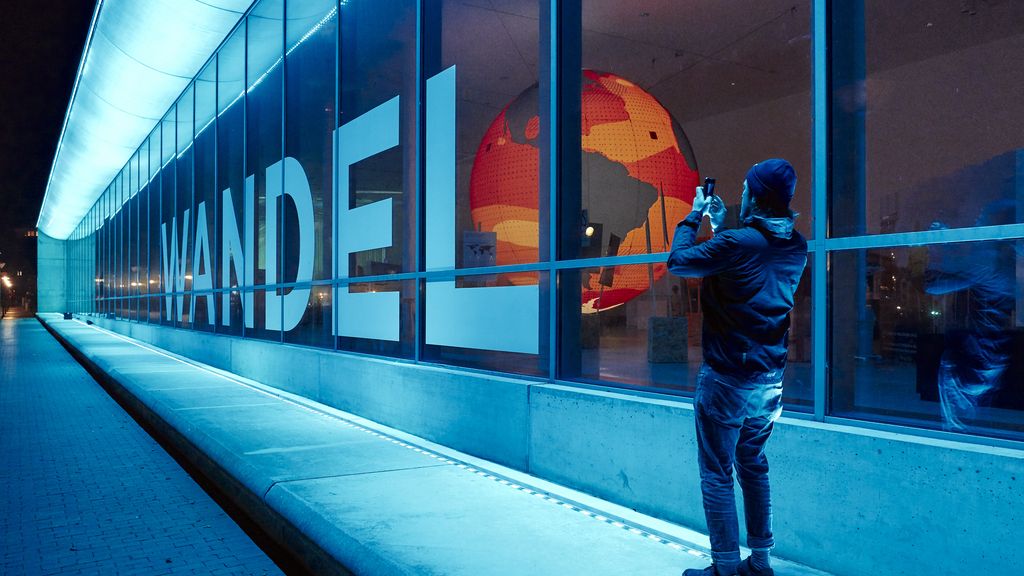 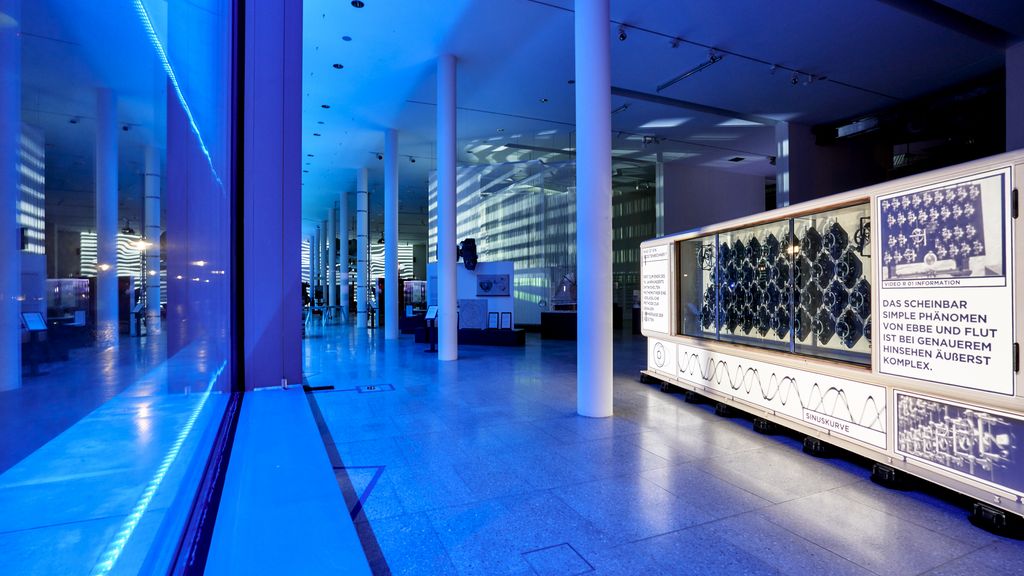 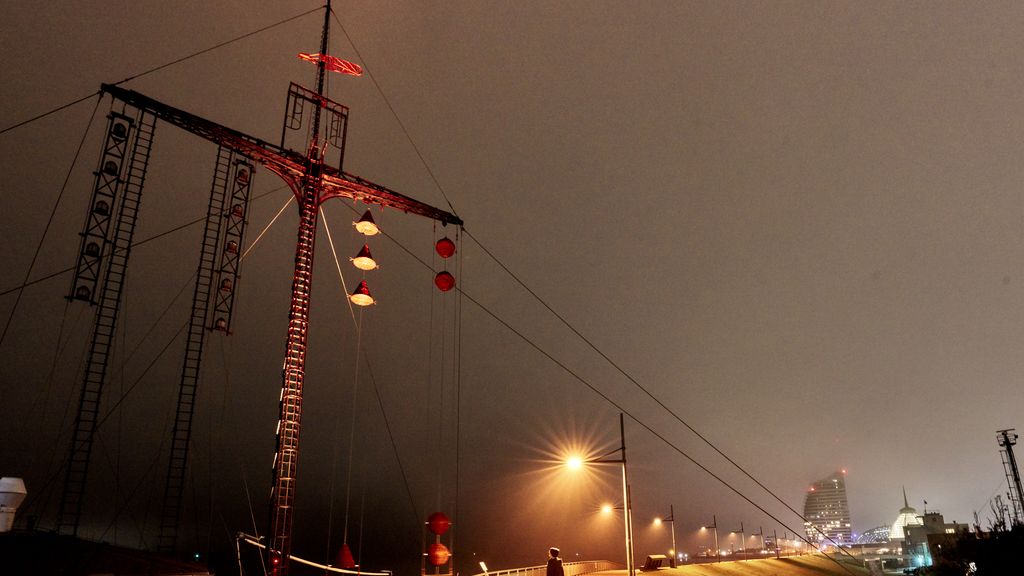 The water level indicator was renovated thanks to the efforts of the Förderverein. 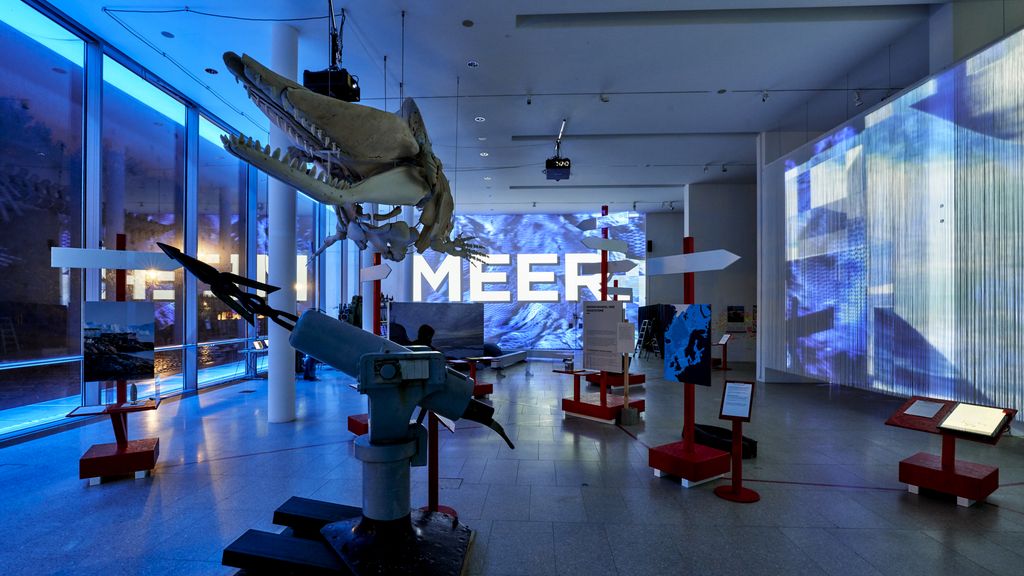 The temporary media installation sets lighting accents inside the Bangert building and illuminates individual exhibits such as the tide calculator from the GDR.

As a permanent light installation on the Bangert-Bau, FRAME sends signals into the city.