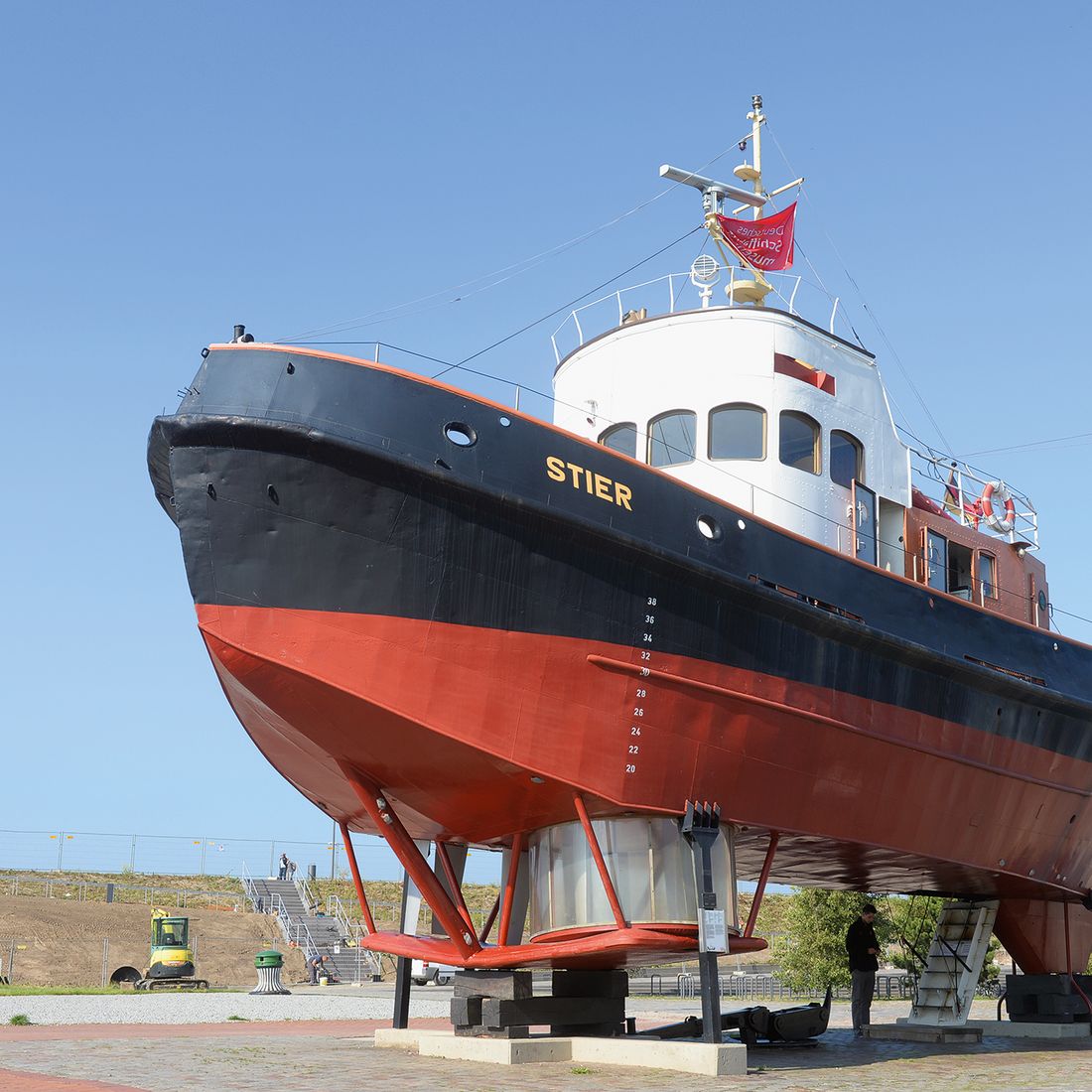 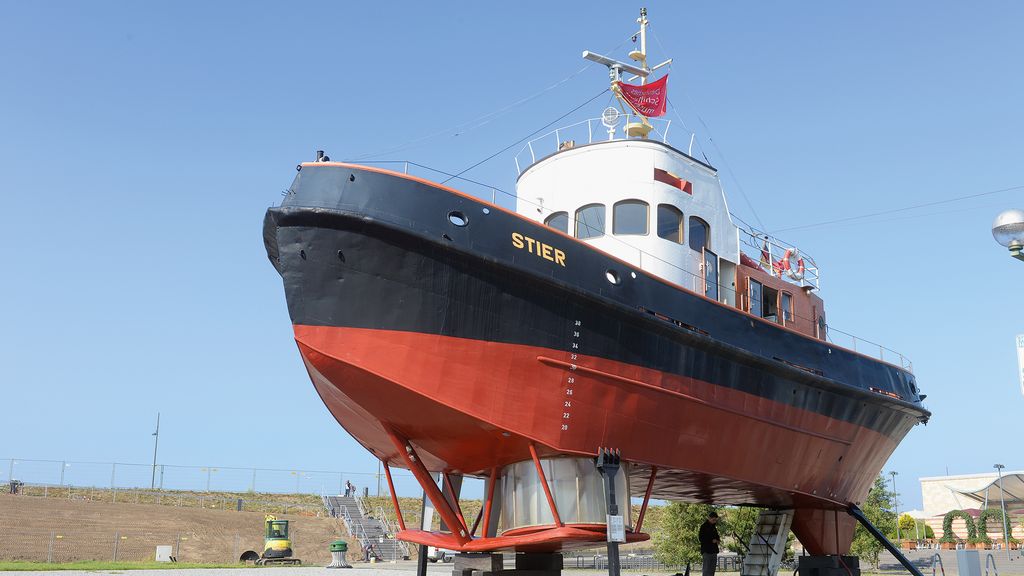 A STIER on the water, a harbor tug in the museum harbor

The STIER is a tugboat that towed and maneuvered ships in Bremen harbors. The harbor tug with Voith-Schneider propellers can be seen and walked on in the museum harbor.

Among the exhibits on display in the open-air museum of the German Maritime Museum is a "water tractor" named STIER, which was built according to a completely new concept. The goal was a particularly powerful, maneuverable and at the same time very safe boat that could tow and maneuver large ships that were difficult to navigate in harbor areas.
The STIER was launched in 1954 at the Jadewerft Wilhelmshaven shipyard, did service for 24 years in Bremen ports for Norddeutscher Lloyd (NDL) and became the model for hundreds of similar harbor tugs worldwide. In 1978, NDL handed over this vessel to DSM.

Voith-Schneider propellers as a technical innovation made the tug particularly maneuverable.

The technical innovation consists of two Voith-Schneider propellers, each with four vertical blades rotating around a common axis. The angles of attack of the blades can be varied within a range of 360 degrees. Thus, the thrust can be directed in any direction. The propellers are each driven by a diesel engine. This type of tug is still in use today, especially in harbor areas or in connection with the construction of offshore wind turbines.

Harbor tugs like the STIER don't have it easy: In almost always confined spaces, they have to tow massive ocean giants many times their own size and weight safely to the quay wall in the harbor or from there to the open sea. This calls for maximum precision and maneuverability. Therefore, the STIER was equipped with a special drive instead of a conventional propeller: The "Voith-Schneider-Propellers" from Maschinenfabrik Voith in Heidenheim, proved to be particularly suitable for this task. In each of the two Voith-Schneider-Propellers, four vertically positioned blades rotate around a common axis. The angle of attack of the blades can be changed within a range of 360 degrees and the thrust can be directed in any direction. The propellers are mounted under the forebody and are each driven by a diesel engine. They serve both as propulsion and steering. A hydrofoil-like bottom plate, attached to the hull by eight supports, protects them from grounding. All in all, the STIER was characterized by excellent maneuverability, which was absolutely necessary for maneuvering in the narrow harbor waters.

With her 700 hp in a length of less than 20 m, the STIER is a small powerhouse. Thanks to this small hull and a special design, the towing hook could be mounted very far aft without compromising maneuverability and capsize safety. In addition to towing, tugs must be able to push other vessels from time to time. Reinforcing the hull distributed the forces throughout the structure. Discarded car tires attached outboard provided additional protection.

The crew and their accommodation

The STIER was manned by the captain, the engineer, the cook and a sailor. If necessary, there could be a total of six people. The responsibility and the necessary expertise were considerable, because mistakes could have serious consequences in large ports with many huge, difficult-to-maneuver ships and different, often precious or even dangerous cargo. The captain's living and sleeping quarters, the galley, a washroom with WC and a shower room were located in the wheelhouse. The engineer was housed in a compartment on the port side and the four berths and lockers for the seamen were located in the lower deck room.

The STIER had several crews, which alternated in a shift duty. This was possible because tugs rarely left their home port. Thus, the crew was not on board for as long at a stretch as on the RAU IX and the SEEFALKE.

A journey from water to land

In 1954, the water tractor STIER was put into service by Norddeutscher Lloyd. Prior to that, the STIER had been built by the Jadewerft Wilhelmshaven. This particularly powerful and maneuverable tugboat safely towed countless ships through Bremen's ports for 24 years. In 1978, the NDL handed over this ship to the German Maritime Museum. The STIER sailed into the Old Port under its own power / on its own keel and was then jacked up on shore with cranes. Thus the special feature, the Voith-Schneider propeller, can always be seen by the visitors*.

Info flyer - Bull on the water