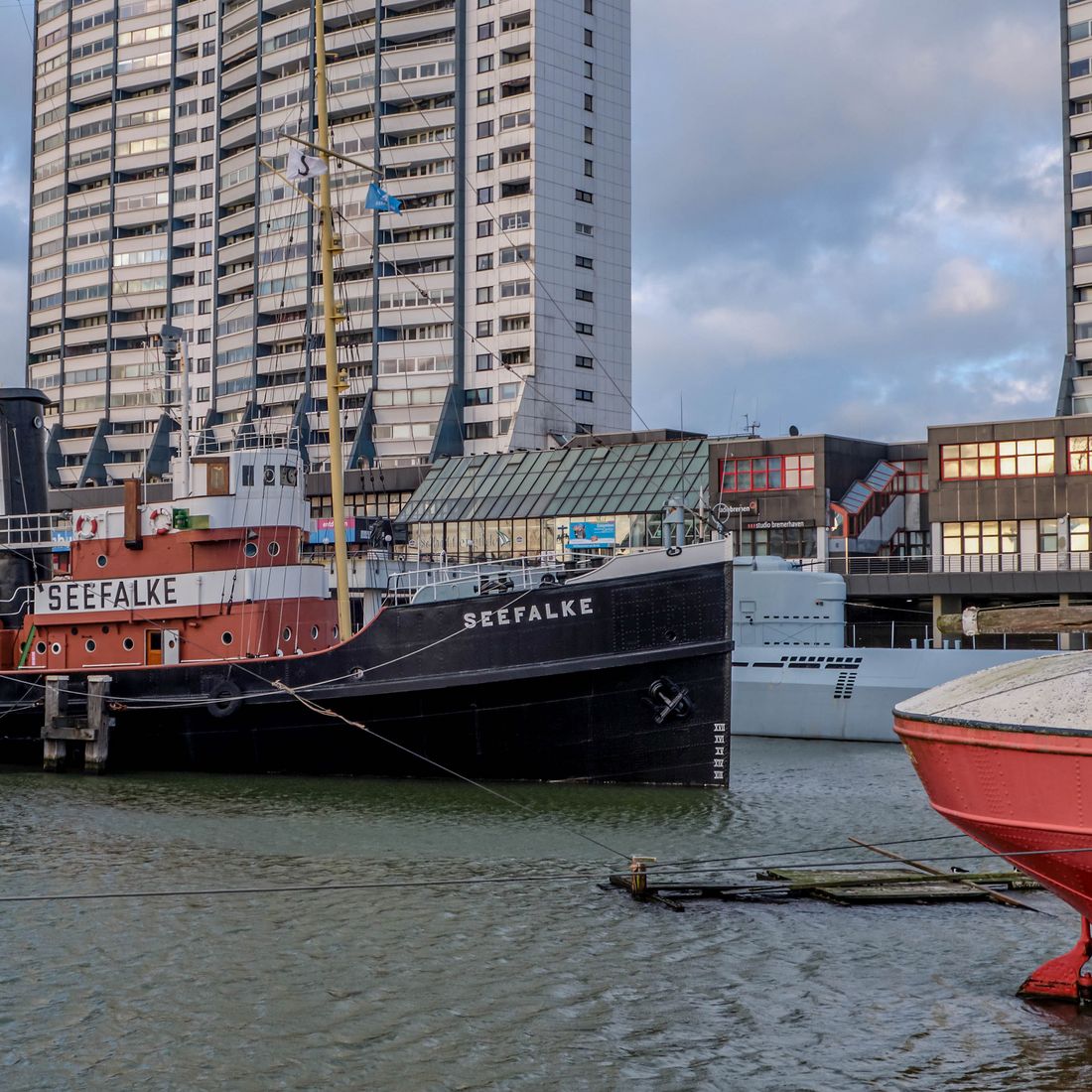 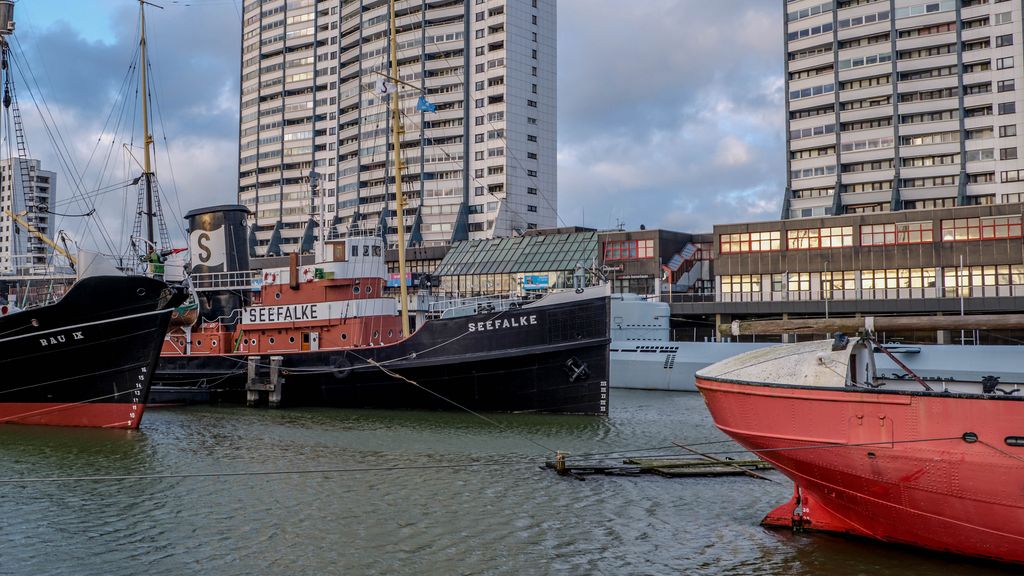 This powerful and fast deep-sea salvage tug was put into service in 1924 with a complete equipment for salvage, towing and fire fighting. Thanks to its excellent technical equipment and specialised crew it came to the aid of many ships in distress year after year.

During the Second World War the SEEFALKE was sunk in a bombing raid in Kiel harbour. When the victorious powers wanted to fill the harbour basin with rubble after the war, the shipping company had the ship secretly lifted at night, transported it to a bay in the outer fjord and sank it there again. After the Allies lifted the salvage prohibitions in 1950, the ship was lifted again and - repaired and modernised - put back into service.

It has been lying here in the museum harbour since 1970 and has a radio station on board which is operated by amateur radio operators. 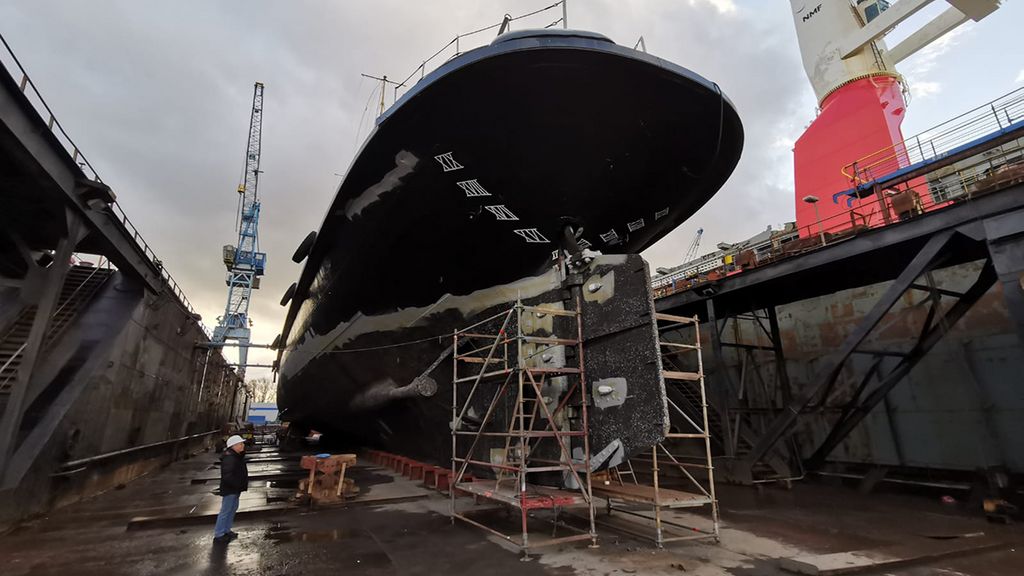 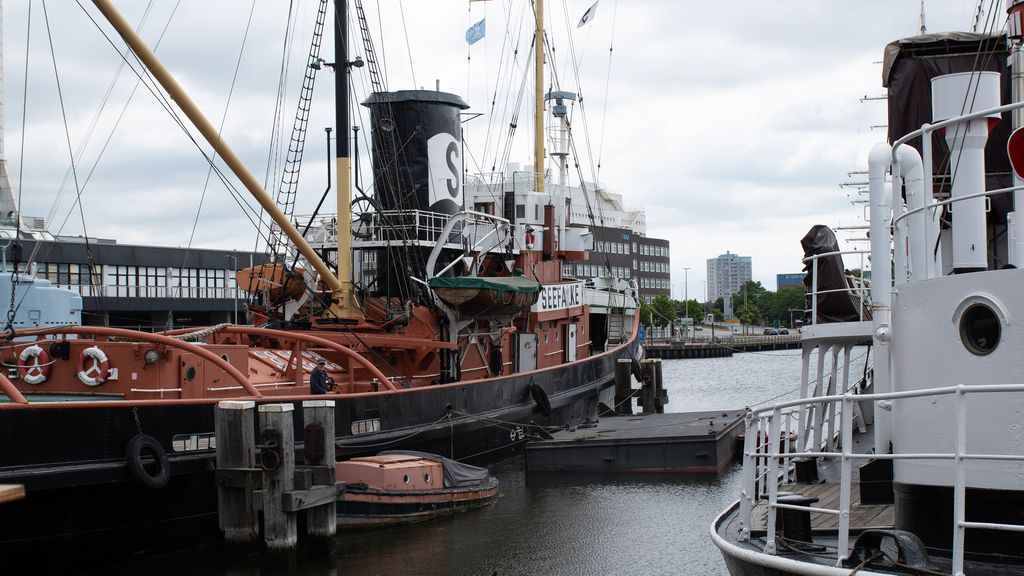 Deployment in the service of safety

Ocean-going salvage tugs like the SEEFALKE are equipped to provide assistance to ships in distress on the high seas. This includes salvaging them in the worst weather, towing them or extinguishing fires. The fact that the SEEFALKE was capable of doing this can be easily seen from its exterior: The 14 mm thick steel plates of the outer skin ensure great stability, the high forecastle mounted at the front repels even the highest waves, and the mighty hawser guards prevent the heavy towing hawsers from getting caught in superstructure parts during towing operations. The large stern winch and the towing gear with its two hooks also show their reliability. The particularly high masts with their radio antennas can ensure long-range connections. (By the way, the radio station under the conning bridge in the bridge house is still used today - by Bremerhaven amateur radio operators, the DARC.) The working spotlight and the towing lights are of course indispensable to be able to work accurately at night and in bad weather.

The SEEFALKE has two engines. The MAN engines originally installed were replaced in 1942 by two powerful Deutz diesel engines, each driving a four-bladed propeller cast from propeller bronze with a diameter of 2.20 meters. Cast steel propellers were used when traveling through ice. The technical capability is very ample to cope with all salvage situations. This applies especially to the auxiliary engines, the gensets and the pumps, the fuel oil tank (for 193 tons), but also the drinking water tank (for 10 tons) and the provisions room. Thus it was no difficulty for the SEEFALKE to salvage / tow even very large vessels like various tankers.

The crew and their accommodations

Not only the equipment of the ship was prepared for the heavy work on the high seas, also its crew had to be up to the special, often complicated tasks. In addition to the captain and the salvage inspector, the crew, which was always highly qualified, included about 11 officers as well as four sailors, the cook and the steward. The crew quarters for the sailors and the chambers for the cook and the steward are reached via a companionway on the stern deck - in front of the room for the salvage equipment and the drive for the large stern winch. The accommodations are specially insulated against damp and cold, and deck glass provides daylight. The captain's living and sleeping quarters and a bathroom are in the bridge house, below which are the officers' mess and galley . The eight officers' living quarters in the tween decks have skylights and can be artificially ventilated during voyages in the tropics or in bad weather.

She SEEFALKE was regularly stationed in foreign ports. Such a stay could last for months. For this period, the ship was home to the crew.

The SEEFALKE set sail for the first time in 1924. During her time of service, her destinations were all over the world. In the last days of the Second World War, the SEEFALKE was sunk during a bombing raid in Kiel harbor. Before the occupying forces filled the harbor basin with rubble after the war, the shipping company had the ship secretly lifted at night, transported it to a bay in the outer fjord and sank it there again. After the Allies lifted the salvage bans in 1950, the ship was lifted again, repaired, modernized and put back into service. Thus, the SEEFALKE was in service until 1970. Since then, she has been moored here in the museum harbor and invites visitors to experience her special history up close.