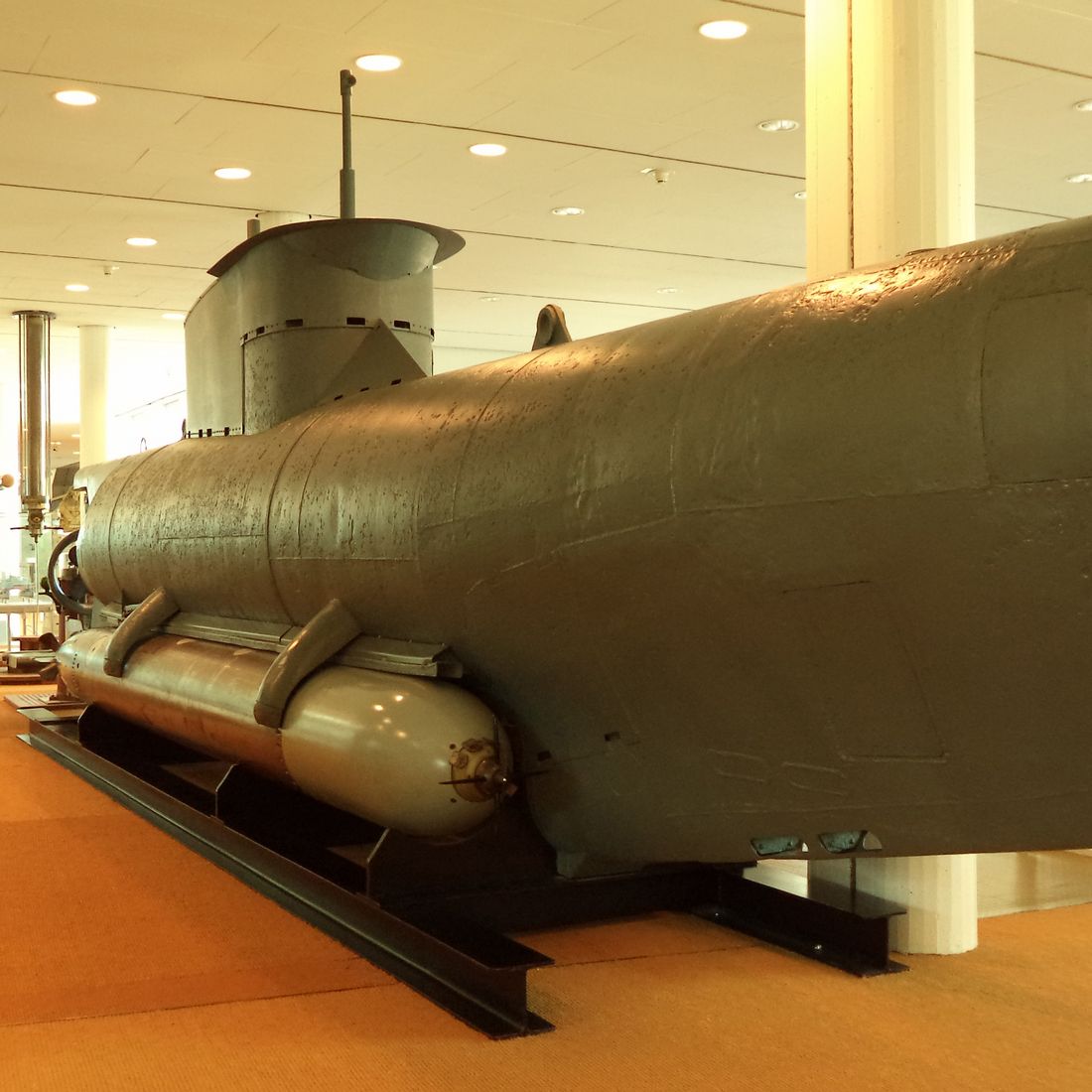 The small submarine type XXVII was used in the last year of the Second World War. Discover the background of the fascination and horror of the "seal" in our exhibition.

"From the "Seal" is now known that it is the submarine type XXVII (sometimes also called type 127). In contrast to the "Beaver", it is probably constructed and equipped in a well-designed way. There is a remarkable similarity between "Seal" and the prefabricated submarine types XXI and XXIII, and it seems that it is a miniature version of the latter." Klaus Mattes, historian and expert on small submarines, quotes here a British secret service report from February 1945, at which time several missions of the "Seals" had already been carried out.
Starting in the summer of 1943, the Naval High Command saw the establishment of a fleet of so-called small submarines as a last resort to disrupt Allied supply routes in the naval war and to turn the tide of the war.

The fleet development of the German Empire had initially concentrated on the construction of large combat ships, in keeping with the spirit of the times. Only when in the course of the war the large battleships were destroyed and the regular submarines were easily detectable after deciphering the Enigma code, a change in thinking set in. A weapon was developed, which had the goal to spread terror. Due to their size, the small submarines were barely visible on radar and were supposed to sink the supply ships in the English Channel by surprise. The guerrilla tactics would have tied the Allied attack forces into defensive battles and relieved the pressure on the combat units at the front. However, the situation in practice developed differently from what had been imagined in theory. In order to characterize the first mission aptly, Klaus Mattes has one of the submariners report:
"On January 1st, 1945, the 1st Seal Flotilla with 18 boats was deployed against the enemy supply in the waters off the Scheldt estuary. It was the first enemy trip of the seals. Only two boats returned. One of them was our boat."

Was the late start of production the cause of the disasters in the submarine warfare?

What had happened? The construction of the small submarines would be an obvious cause of the losses. The idea of developing smaller submarines had been considered long before the war and not only in Germany. The first submarine - the BRANDTACHER, developed by Wilhelm Bauer in the 1850s - can also be considered the first small submarine. However, the development of such submarine types was not pursued further in the German Empire. In Great Britain, however, they did. Two small submarines of the Royal Navy damaged the 50,000-ton battleship TIRPITZ so badly by attaching mines that it could no longer be used during the war. The German production of similar small submarines started afterwards. Types with code names such as "Biber", "Molch" or "Hecht" were constructed. The difficulty for the engineers of the construction office of the Kriegsmarine was to accommodate the technology for successful diving and fighting, which in regular submarines extended over a larger area, on a much smaller surface. But the spatial concentration of the technology was not the only challenge for the engineers.

A truck diesel engine was installed in the "Seehund"

Due to the damage to the military production facilities, on the one hand the individual submarine parts had to be developed separately from each other and on the other hand parts had to be used that were in stock and did not require extensive development. For example, the "Seal" was fitted with a diesel engine that was actually intended for trucks. Nevertheless, the engineers of the Naval Design Office have developed a well-functioning machine in the form of the "Seehund".
One of the reasons for this was that weak points could be repaired by testing previous models. The final result was the "Seehund", a submarine for two persons with a diesel-electric propulsion system, which comprised three chambers. Since functionality was the main focus, only one chamber was planned for the crew. The "Seehund" was therefore a complex and uncomfortable, but well constructed submarine.

But if the technology did not fail - then how can the catastrophic defeat of the small submarines in the first months of operation be explained? In addition to the technical aspect, the human component of the boat must also be considered. The engineer just mentioned says: "I assume that most submarine accidents - not the losses due to enemy action - are caused by incorrect assessment of the situation and operating errors. A submarine is a sensitive vehicle [...]. It is not forgiving of mistakes [...]!" Looking at the composition of the teams, the problem becomes clearer. The deployed soldiers were all members of the navy and some of them had experience with submarines. But because of the advanced war they were very young. Added to this was the short period of training, which made it possible to get to know the functions of the "seal", but was not sufficient for a more in-depth training, let alone for building up a profound wealth of experience.

Especially for this small submarine, however, excellent knowledge in handling the machines was absolutely necessary. Circumstances forced the naval command to send highly motivated officers, who were inexperienced in handling the submarine, to the mission. The wintry sea and the strong presence of the Allied fleet in the English Channel further aggravated the situation for these young men. The days of operations in the confinement of the submarine, in which movement was almost impossible, were an additional strain on the nerves of the crew. Caffeine-containing chocolate and the stimulant Pervitin were supposed to help, but the substances often had the opposite effect. After the first month with 43 missions, almost every third submarine of the type "Seal" had not returned from the mission. The successes amounted to two sunken ships. In the end, the horror that this weapon was to bring was directed against the own crew.

One of these small submarines is in our exhibition today. In the 1970s, the exhibition area in question was set up. The boat was found in 1969 in the western harbour of Wilhelmshaven. Sport divers discovered three submarines one after the other, on which the torpedoes were still mounted. Since no other war damage to the boats had been discovered and no remains were found, it can be assumed that the Wilhelmshaven-based command centre sank the small submarines to prevent them from falling into the hands of the advancing Allied troops. How badly the tides had hit the submarines and whether they were fully assembled submarines is difficult to determine today. During the repair, however, changes were made to the submarine which made the boat "public-friendly". The turret underwent a redesign, a periscope was inserted and an exhaust pipe was added. The company also cut out parts of the outer hull to allow a view of the interior through plexiglass panes. It seems as if the alteration measures were intended to present the audience with a submarine that looks prototypical and whose technical finesse can be seen. But the submarine not only fascinated the visitors* at the time. "We definitely do not want a II. We certainly do not want to see a World War II submarine set up here in Bremerhaven", one visitor wrote in the visitor's book in 1984.

Fascination and horror are very close together in this exhibition object, both in the past and today. The challenge for the future exhibition will be to convey the horror this object caused in the Second World War and yet to show what the fascination is based on today.

Submarines of the Second World War evoke a variety of emotions. Experience the tension between fascinating technology and the terror of war in our new exhibition.